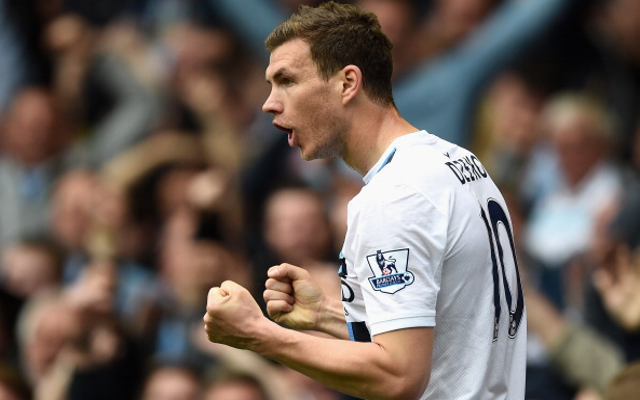 Manchester City officials expected the Bosnian international striker to sign a new deal with the club in due course.

Manchester City expect striker Edin Dzeko to sign a new contract in the near future, report the Mirror, with the club keen to show that they value the Bosnian international.

Dzeko played for his national team at the 2014 FIFA World Cup, leading the line for Bosnia & Herzegovina, but he was unable to help them make it out of the group stage in their first ever major international tournament.

The 28 year-old had a fine 2013/14 season, possibly his finest for City to date, maybe after being spurred on by the arrival of increased competition in the shape of new signings Alvaro Negredo and Stevan Jovetic.

He arrived at the City of Manchester Stadium from Bundesliga club Vfl Wolfsburg in 2011, going on to play more than 100 Premier League games in a sky blue shirt.

He previously played for Bosnian club Zeljeznicar and Teplice in the Czech Republic, scoring the goals to earn his big move to German football.

Despite his displays often seeming to be languid and slow-paced, Dzeko has a fine goalscoring record for Manchester City, having bagged 46 league goals for the club, an impressive record considering he has spent much of that time playing second fiddle to Sergio Aguero and Mario Balotelli.