Liverpool have revealed that incoming midfielder Emre Can will wear the number 23 shirt next season.

The number was left vacant following the retirement of club legend Jamie Carragher in the summer of 2013, and the decision is likely to prompt a mixed reaction on Merseyside.

Some suggested that Liverpool should retire the shirt worn by Carragher for over 17 years and 700 games. Manchester United are rumored to be considering retiring the number 11 shirt in honour of Ryan Giggs, and after 23 was left vacant at Anfield last season, it was suggested that the Reds could be thinking of a similar approach.

The number 23, which was previously worn by another ex-Liverpool star – Robbie Fowler – holds a special place in the hearts of many Liverpool fans, and is guarded with a similar reputation to the number seven worn by the likes of Kenny Dalglish, Kevin Keegan and, most recently, Luis Suarez.

Despite the shirt’s hallowed nature, Liverpool chiefs have risked the wrath of the Anfield faithful, and taken the decision to hand the number to the 20-year-old German, who has played just 33 top flight league games in his home country.

Can has described the choice of his employers as an ‘honour’, and Liverpool fans will be hoping that the player can live up to the number’s exceptional reputation. 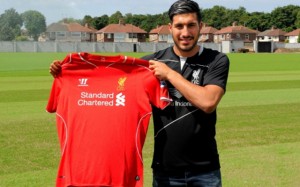