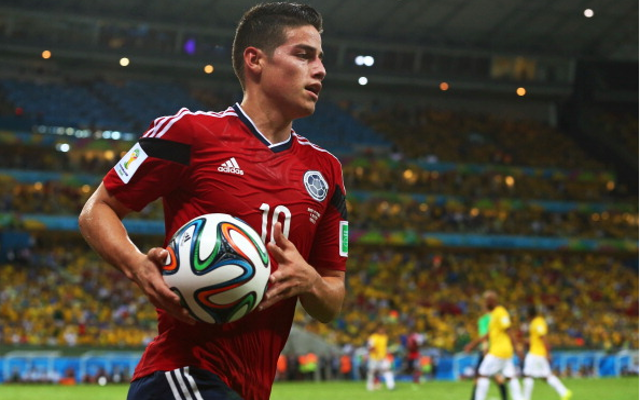 Old Trafford side look to bring in AS Monaco star and are willing to pay a massive price in order to do so.

Man United appear ready to move heaven and earth to land Colombian World Cup star James Rodriguez with the Metro claiming that the Old Trafford side are ready to fork out as much as £90m to land the AS Monaco youngster this summer.

The Old Trafford side are willing to offer an initial £65m sum for the 22 year old attacker though are also prepared to include ‘lucrative bonuses’ that would see that figure rise to £90m, an offer the Ligue 1 side may struggle to ignore.

Though clearly the cash-rich Ligue 1 side are not short of finances they may feel the need to sell a player or two to help meet UEFA’s stringent FFP (Financial Fair Play) guidelines, not least as AS Monaco are set to make a long awaited return to Champions League action this coming season.

AS Monaco paid €45m (£36m) for Rodriguez last May and could see this as an opportunity to make a swift profit on the former FC Porto man.

Louis van Gaal is looking to conduct a re-shuffling of the squad he inherited from David Moyes and has already spent over £60m to bring in Ander Herrera and Luke Shaw from Athletic Bilbao and Southampton respectively and Man United know that the capture of Rodriguez would provide a real statement of intent and help erase the memory of last term’s disastrous campaign.

Rodriguez finished his first season in France as the leading assist maker in Ligue 1 and is of course the top-scorer at the World Cup finals with six goals to his name.