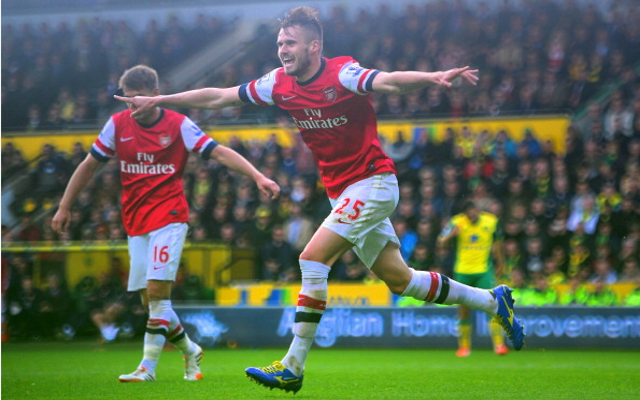 Arsenal’s apparent move to sign Newcastle United right-back Mathieu Debuchy could also lead to youngster Carl Jenkinson moving in the opposite direction according to the Daily Mail.

The 22 year old England international battled manfully to unseat Bacary Sagna as Arsene Wenger’s first choice starter and the arrival of the Magpies man may well lead to Jenkinson considering his options.

Sunderland and West Ham are both said to hold an interest in the Gunners star but he could instead move to St James’ Park where he could well benefit from regular first team action.

Jenkinson is something of a fan favourite at the Emirates Stadium due to the fact that the defender is a lifelong fan of the club and always gives his all when called upon however the full-back may have to leave Arsenal or risk seeing his career stagnate on the bench.

The former Charlton Athletic man moved to Arsenal in June 2011 and has made 26 Premier League starts but will struggle for first team playing time if Debuchy does indeed move to take Sagna’s spot in Wenger’s starting eleven.