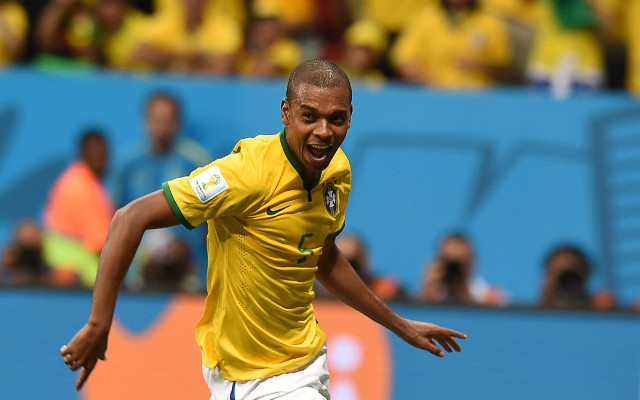 Germany produced a stunning display to dispatch an abject Brazil, as they emerged 7-1 winners from a stunning World Cup semi-final.

The tournament hosts found themselves 5-0 down within the opening half hour as goals from Thomas Muller, Miroslav Klose, Toni Kroos (2) and Sami Khedira left the five-times champions humilated, humbled and taken apart.

Another Chelsea player – Oscar – netted a late consolation for Brazil, but the goal meant very little to the home side, many of whose players were left in tears at the final whistle.

The absences of star striker Neymar through injury, and suspended captain Thiago Silva, were all too obvious as they were swept aside by the dominant Germans, who will play either the Netherlands or Argentina in the World Cup final.

Here are how the players rated:

Could perhaps have done a little better with Germany’s third goal, but was otherwise blameless in Brazil’s humiliation, despite becoming the first goalkeeper in his country’s history to concede seven goals in a single match.

The best part of Brazil’s appalling defensive display – and that’s really not saying very much. As in the quarter-final, the former Manchester City man was preferred to Dani Alves, but was exposed this time around.

His performance truly emphasised why Brazil’s captain, Thiago Silva, was such a big miss. Chelsea manager Jose Mourinho predicted that the PSG defender would be a more significant loss than Neymar, and was proved right.

After a series of inspirational displays at this summer’s tournament, the former Chelsea defender was rewarded with the captain’s armband for the semi-final. He responded with a dreadful performance, which saw him constantly caught out of position. He’d completely lost the plot before half-time, and was luck not to be substituted.

Was caught out of position time and time again as Germany ran riot down Brazil’s left hand side. The Real Madrid full-back had enjoyed such a positive end to his club season, but that will be all but forgotten in the wake of this performance.

Anonymous, and that’s arguably a compliment when you compare him to his fellow midfielders. Having missed the quarter-final through suspension, you’d be forgiven for thinking that he was still sitting on the sidelines.

Words can not do justice to quite how bad the Manchester City player was, who seemed disinterested at best, and downright destructive at worst – he was substituted at half-time after gifting the Germans two of their goals.

The spotlight was on this cult figure following the injury to Neymar, but he failed to produce in the big game yet again as he too was replaced at half-time. Did not offer Marcelo any help down Brazil’s left hand side.

His threat was all but nullified by the dominant German midfield, but he was one of the few players in a Brazilian shirt who kept running and kept working. His endeavor was rewarded by a late consolation goal, although he was left in tears at the final whistle.

One of the few bright sparks in Brazil’s team, he made some dangerous runs and did his best to fill the void left by Neymar. While he fell some way short, his sprinting to take a stoppage time corner kick at 7-1 down summed up his work-rate.

His limitations continue to be exposed. Brazilian fans took to booing every touch made by their lead striker, who was duly substituted after a miserable evening. He finished the World Cup with just one goal in six games.

Even in such a one-sided game, the German goalkeeper came off the field with his insurmountable reputation enhanced yet further. A series of excellent second-half saves prevented any unlikely comeback.

Looked far more comfortable back in his favoured full-back role, rather than in defensive midfield, and emphasised his worth with a potentially goal-saving tackle on Marcelo when Germany led 1-0.

Looks to have developed massively since a disappointing spell with Premier League champions Manchester City, and justified his selection ahead of Arsenal’s Per Mertesacker with a steady and calming display.

Germany’s defensive talisman was rarely troubled during the first-half, and was substituted at half-time as his country planned for the World Cup final – protecting one of their star players from any potential injury.

Quiet, but defensively sound performance from the full-back, who did well to keep Bernard out of the game for large periods. The Schalke player will need to prepare himself for a more challenging night’s work, be it Argentina or the Netherlands that face Germany in the final.

Dominated the midfield and laid the platform for Brazil’s demise. The 29-year-old is playing in his third World Cup, and has finally progressed beyond a semi-final. Can one of the best players in recent German football history finally get his hands on some silverware.

Scored one and made another, the Real Madrid man turned in a stunning display reminiscent of his breakthrough performances in South Africa four years ago. Could have easily had a second had his goal-bound shot not been inadvertently blocked.

His destructive movement was the catalyst for Brazil’s thrashing. He scored the opening goal with a well taken volley, and was involved in the build-up for both of the next two goals. A goal in the final will draw him level with James Rodriguez in the race for the tournament’s golden boot.

Scored two, made two, the ruthless midfielder couldn’t have done much more. He took his goals well, and tore the Brazilians apart with his exquisite play. Could easily have scored a hat-trick if he hadn’t selflessly set up Khedira for Germany’s fifth.

The Arsenal midfielder missed one glorious opportunity to add his name to the score-sheet, but was otherwise impressive, helping create both the second and fifth German goals. Helped move the ball forward with devastating speed.

While he may have slowed down in terms of pace, his finishing is still as deadly as ever, and the poacher grabbed his record breaking 16th World Cup goal at the second attempt, firing past Cesar after the Brazilan keeper had smothered the initial effort.