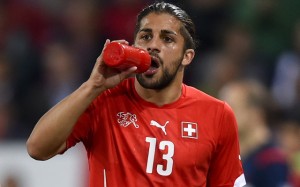 The Daily Mirror believe that United will target Swizz left-back Ricardo Rodriguez to fill the void left by Evra’s departure.

Rodriguez, 21, current plays for German side Wolfsburg, and impressed at the World Cup – setting up both his team’s goals in the 2-1 win over Ecuador.

He scored five goals and made nine assists for his club side last season, and would provide strong competition for Luke Shaw.