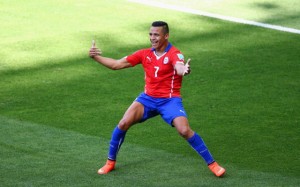 Alexis Sanchez has edged yet closer to his move to Arsenal, with TalkSport reporting that the Chilean will sign a four-year contract at the Emirates Stadium.

Gunners manager Arsene Wenger has revealed that Sanchez’s £28 m move is ‘almost done’, and that the 25-year-old will become the North London club’s second summer signing, following on from Newcastle United full-back Mathieu Debuchy, who is also thought to be close to completing a move.

Sanchez was linked with a host of European clubs this summer, including Liverpool, who hoped to sign the World Cup star as part of the deal that saw Luis Suarez move to Barcelona. However, Arsenal look to have won the race for the player’s signature, who could complete his move later today.

Elsewhere, Thomas Vermaelen is set to meet with Arsenal to finalise his future, with Manchester United poised to step up their interest – Sky Sports.

Arsenal are ready to step up their pursuit of Germany midfielder Sami Khedira, who starred during Germany’s 7-1 World Cup semi-final win over Brazil – The Guardian.

While the Gunners are also closing in on a move for QPR striker Loic Remy – The Metro.