David Sullivan is desperate to keep the 15-year-old at West Ham.

West Ham United have offered a lucrative contract to teenage defender Reece Oxford in an attempt to keep him at Upton Park amid interest from London rivals Arsenal and Chelsea, according to The Mirror.

Oxford, 15, could become one of the highest paid youngsters at West Ham if he opts to stay with the Hammers.

The tall ball-playing centre-back is an Under-16 England international and has been likened to former Manchester United star Rio Ferdinand, who also came through the youth ranks at West Ham.

Arsenal and Chelsea have apparently been tracking Oxford for a number of months.

Striker Kaylen Hinds welcomed Sheaf to Arsenal on Twitter, before Oxford retweeted the message, fuelling speculation that he could be set to join his former teammate in North London. 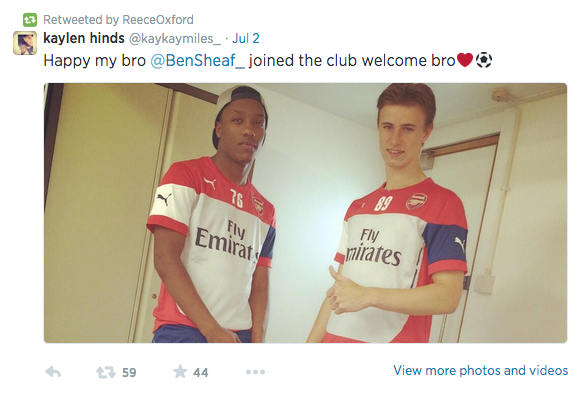 The Mirror quotes Sullivan as saying: “It almost makes you give up on having an academy if they can come in and nick your best 15-year-old. What’s the point?

“I think they are going to change it now and there is going to be some retrospective compensation. So you’ll probably get £250,000.

“But for each £4m you get one crop. So you’d have to have 16 players like that to cover the cost of running the academy- and [Oxford] is the best of the crop.

“So its a joke that they can come and nick your best players for £250,000. The big clubs just go to the player. If he refuses to sign a scholarship then they’ll have offered him a guaranteed pro scholarship which we would match.”