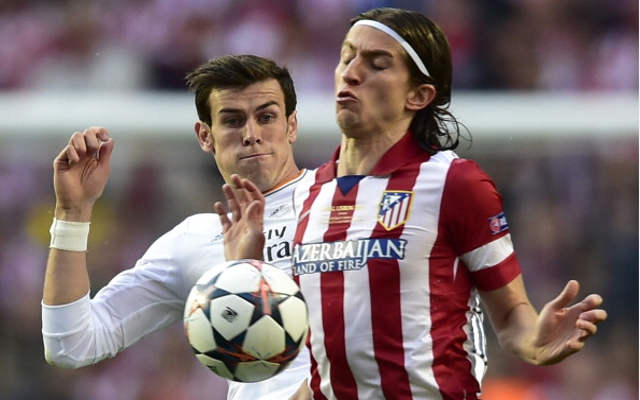 The Blues are keen on signing Filipe from Atleti.

Atletico Madrid left-back Filipe Luis is on the verge of joining Chelsea in a £20m deal after the fee was agreed between the two clubs, according to the Sun.

The Blues are on the hunt for a replacement for Ashley Cole, who agreed to join AS Roma this month after eight years at Stamford Bridge.

Manager Jose Mourinho is a huge admirer of Filipe, who helped Atleti knock out the 51-year-old’s side during the Champions League semi-finals last season.

The 28-year-old was also a key part of the team that won their first La Liga title since 1996 under Diego Simeone in 2013/14 and the full-back can feel hard done by that Brazil manager Luiz Felipe Scolari left him out of the 23-man squad for the 2014 World Cup.

The arrival of Felipe will take Mourinho’s spending this summer to £82m, with Cesc Fabregas, Mario Pasalic and the Brazilian’s former Atletico teammate Diego Costa having already been signed.

There is something of a theme with players moving from the Vicente Calderon Stadium to West London this summer, as along with Costa goalkeeper Thibaut Courtois has returned to his parent club after three years on-loan in the Spanish capital, whilst Portuguese midfielder Tiago is also expected to return to the Bridge after being released by the Spanish champions.