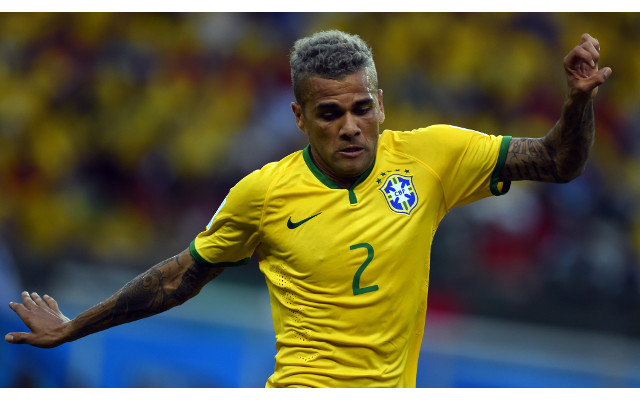 Emotional message from Brazil right-back in the wake of 7-1 thrashing.

Brazil star Dani Alves has hit back at the criticism of his teammates following their humbling defeat to Germany in the semi-finals of the 2014 FIFA World Cup.

Attack-minded right-back Alves did not play in the record-breaking 7-1 loss in Belo Horizonte, but he has leaped to the defence of the 14 players who were involved, as well as coach Luiz Felipe Scolari.

Alves uploaded the below image of Scolari and Brazil’s 23-man squad to Instagram.

The Barcelona man accompanied the picture with the message: “I know a lot of a**holes will make fun.

“I know a lot of losers in the biggest game in the world, which is the book of life, will rejoice.

“I want to take this hard moment for all of us who chose football as a profession and who were chosen to represent our country in this World Cup.

“I would say that, for me to share with you all this time, was an unmatched pleasure.

“But I would like to say publicly that you are f***ing champions. I am privileged to be part of this group, you are champions, which all these a**holes will never be.

“Today you are not respected here but in the rest of the world I’m sure you are. Bad days like this teach us to appreciate the good days.”