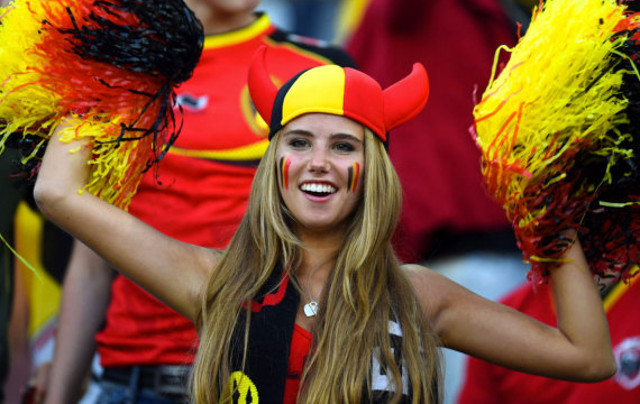 Belgium were knocked out in the quarter-finals, but stunning supporter Axelle Despiegelaere was one of the tournament’s big winners. A teenage Belgium fan has signed a modelling contract with L’Oreal after being spotted supporting her nation at the FIFA World Cup.

Student Axelle Despiegelaere, 17, was shown on TVs all across the planet when the host broadcaster cut to her in the stand during a group stage match.

Hot pictures of her dressed in her country’s colours subsequently went viral on the internet.

When she returned home from Brazil, she set up a fan page on Facebook, which has attracted over 200,000 followers already.

French cosmetics and beauty company L’Oreal then contacted her and quickly snapped her up.

Check out the video that L’Oreal released of their newest model on Tuesday (below) and then click through the pages to see more hot pictures of Miss Despiegelaere.

Video: Unlucky moment as Barcelona’s Martin Braithwaite fails with flick for Denmark that Memphis Depay and Jack Grealish dazzled with during the break Nov 18 2020, 21:44
International Football

‘Get Fraudgate out’ – These England fans react after ‘shocking’ performance in nervy win against Belgium Oct 11 2020, 19:08
International Football