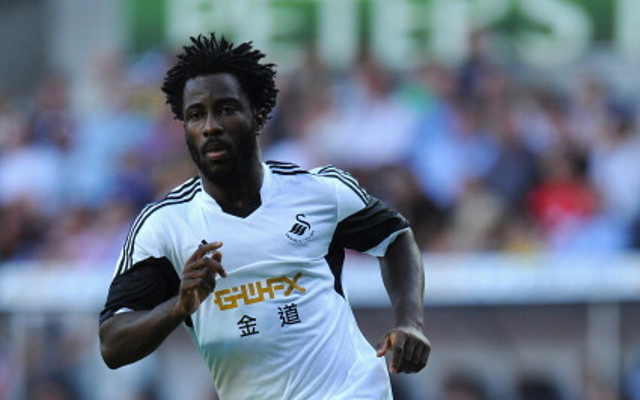 Swansea will sell Bony once they sign Deeney from Watford.

Swansea City are closing in on a £6m deal for Watford’s Troy Deeney which will which trigger the availability of Liverpool and Tottenham Hotspur target Wilfried Bony, reports the Guardian.

Having already signed Bafetimbi Gomis from Olympique Lyon this summer, the arrival of Deeney means Swans manager Garry Monk will have enough cover in attack to cash in on Bony.

Spurs have been interested in the Ivory Coast international for some time as they look to improve things upfront at White Hart Lane.

Last season only Emmanuel Adebayor showed any decent form in the final third, with £26m Roberto Soldado a disappointment and Harry Kane still unproven at the top level.

However, they now face competition from Anfield with the Reds’ imminent loss of top-scorer and 2014 PFA Player of the Year Luis Suarez to FC Barcelona.

The Spanish giants are in hot pursuit of the Uruguayan – despite his current four-month ban for biting Giorgio Chiellini – and are expected to complete a swoop for the 27-year-old for somewhere in the region of £70m to £75m.

Although manager Brendan Rodgers has Daniel Sturridge and new signing Rickie Lambert at his disposal, the Northern Irishman is keen to maintain strength in depth as the Merseysiders return to the Champions League for the first time since 2009.

This inclusion in the top tier of European football could be what swings the Bony deal in Rodgers’ favour, with the 25-year-old becoming a key target after scoring 26 goals in his first year with Swansea.