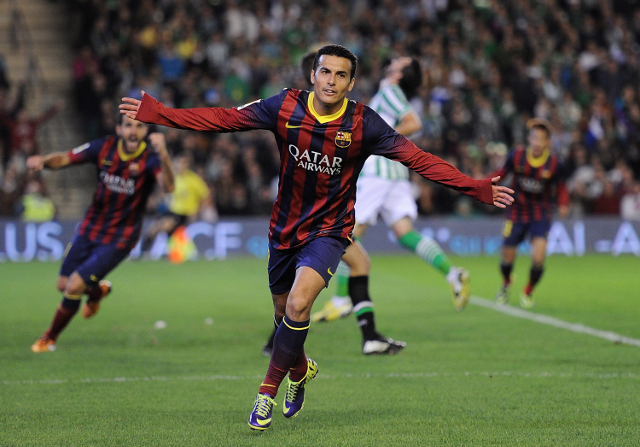 Barca braced for more departures.After selling Alexis Sanchez to Arsenal this week, Barcelona could be braced for another Premier League raid on their squad, as CaughtOffside understands that Manchester United are considering making a bid for Pedro Rodriguez.

With Louis van Gaal’s prime target Angel Di Maria set to decide between a switch to United or to French champions Paris Saint-Germain, the Red Devils are concerned that they won’t be able to compete financially with the mega-rich Ligue 1 club.

United have been reported as making progress in their efforts to land Di Maria, who enjoyed a superb season for Real Madrid in 2013/14 as they won the Champions League and Copa del Rey, but there is still the chance that PSG will simply outbid them, whilst the offer of Champions League football at the Parc des Princes could also prove a factor in his decision. This will then see United make Pedro their priority target, with the Spanish international having been on the club’s radar for some time now after his impressive performances with Barcelona and his national side for the last few years.

After first being introduced into Barca’s first team under Pep Guardiola in 2009, Pedro has played a key role in the club’s success, establishing himself as one of the best goalscoring wingers in the game, and van Gaal sees him as a good alternative to Di Maria.

Pedro may also prove cheaper than his Argentine team-mate, with recent reports suggesting he may be allowed to leave the Nou Camp for around £29m, a similar fee to that which allowed Sanchez to complete his move to Arsenal yesterday. With plenty of competition in the form of Lionel Messi, Neymar and the incoming Luis Suarez upfront, Pedro may now find his place in the side under threat, and choose to follow Sanchez out of the exit door as Barca look to rebuild in almost every area of the pitch.

Big names such as Victor Valdes and Cesc Fabregas have also left the club in this transfer window, while veteran playmaker Xavi is expected to follow, and Pedro is among those not quite considered irreplaceable by new manager Luis Enrique.

This will come as welcome news for United as they eye new signings on the flanks, with Nani possibly set to leave after a disappointing few seasons, while Ashley Young and Antonio Valencia don’t look guaranteed a place in the side next season either.