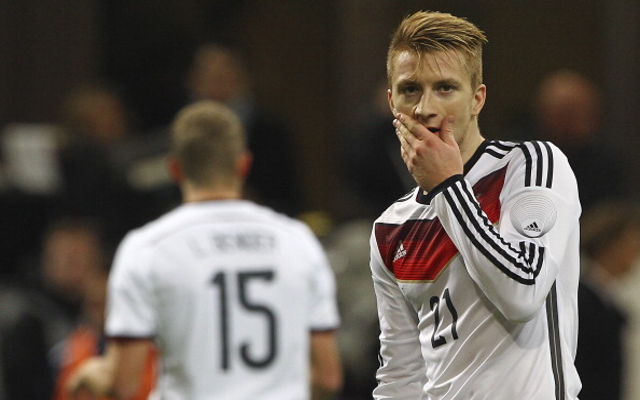 Marco Reus reportedly turned down Manchester United, only to miss out on his desired transfer to Barcelona…

The Daily Express have revealed that Borussia Dortmund star Marco Reus has been left fuming over the collapse of his proposed move to Barcelona.

Reus, 25, who can play both as an attacking midfielder and a winger, believed that he was due a move to the Nou Camp this summer, but has now been told that the deal won’t be happening, with the Spanish giants having signed Liverpool’s Luis Suarez instead.

Reports in Spain suggest that Reus can’t understand how he has been overlooked for Suarez, who is two years older than he is.

It is suggested that Reus’ agent Volker Struth had been in talks for several months over a move to the Catalan outfit, and believed a deal was well and truly on the cards.

New Barcelona manager Luis Enrique determined that Suarez was his preferred target, and convinced his new club to push through with a move for the Uruguayan forward, who scored 31 goals last season.

The annoyance of Reus is magnified by the fact that he had discouraged Manchester United from following up their interest because he preferred a move to Spain. It is suggested that United had an initial bid for Reus turned down by Dortmund, and failed to return with an improved offer after hearing of the player’s preference.

Dortmund are now keen on keeping hold of one of their prize assets, having already seen striker Robert Lewandowski leave for Bayern Munich this summer. Reus has scored 42 goals in 90 appearances for the club since joining from Borussia Monchengladbach in 2012, although the German international missed this summer’s World Cup through injury.