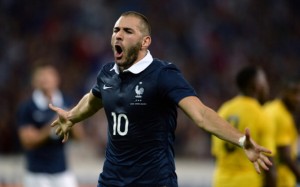 Reports suggest that Liverpool manager Brendan Rodgers will be allowed to reinvest the entirety of the £75m transfer fee from the sale of Luis Suarez, with the Daily Star claiming that French striker Karim Benzema is the man the Reds will start by targeting.

The Anfield club look set to sign at least one more striking talent this summer as they look to deal with the loss of their star man, and the Real Madrid forward, who scored 24 goals in all competitions for his club side last season, could be a leading candidate.

Benzema, 26, has recently returned from the World Cup with France, and could be tempted into a move away from Madrid, where he plays second-fiddle to the likes of Cristiano Ronaldo and Gareth Bale.