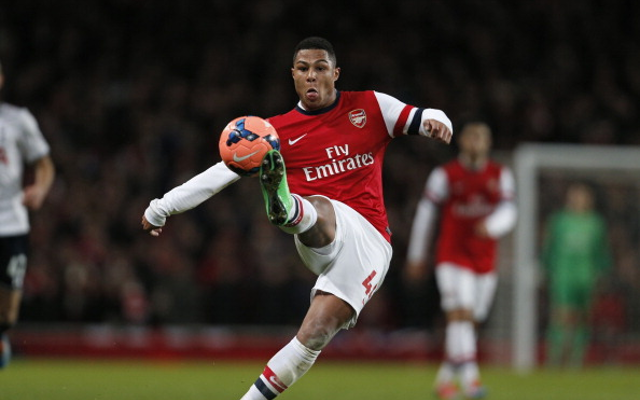 German winger attracting interest from Premier League duo.Arsenal could be close to agreeing a deal to loan out highly promising young winger Serge Gnabry for the 2014/15 season in a bid to get him playing regular first-team football in the Premier League, CaughtOffside understands.

Everton and Southampton are the two leading contenders to bring him in this summer, with Arsenal accepting offers from the two to take the German wide-man on a season-long deal and the player himself set to hold talks with both sides.

One of the most highly regarded young players currently on the books at the Emirates Stadium, Gnabry made fourteen appearances for Arsene Wenger’s side last season, with some eye-catching displays which saw him register a well-taken goal in a 2-1 win away to Swansea City.

Still, with so much competition for places in the form of big-name signings such as Mesut Ozil, Santi Cazorla, Lukas Podolski and this summer’s new addition Alexis Sanchez, Gnabry’s chances of regular playing time look increasingly slim next season.

A temporary move away from the north London club should be a good next step for the midfielder’s career, with both Everton and Southampton representing good choices of club sides for him due to their willingness to give chances to youngsters and their brand of attacking and technically minded football, similar to that deployed by Wenger at Arsenal.

The Toffees relied heavily on the loan market last season, signing Romelu Lukaku on a season-long deal from Chelsea, Gareth Barry from Manchester City, and Lacina Traore from AS Monaco for the second half of the campaign.

With some difficulty in bringing players in on permanent deals, the Merseyside club look set to try a similar approach this summer as they eye a new attacking option in Gnabry, who could also prove useful for new Saints manager Ronald Koeman.

The Dutchman has inherited a tricky job at the St Mary’s Stadium, with key attacking players Rickie Lambert and Adam Lallana both leaving to join Liverpool, and the Arsenal youngster could be an ideal like-for-like replacement on the wing for the latter.

It remains to be seen which club the 18-year-old will choose for next season, but Arsenal should benefit well from the player gaining some top flight experience in 2014/15, with a view to becoming a Gunners regular in the future.