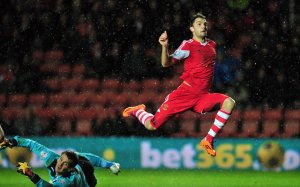 Liverpool are hoping to add six new faces in the remainder of this summer’s transfer window, as they look to reinvest the money made by the sale of Luis Suarez to Barcelona.

The Daily Mirror are linking the Reds with moves for Southampton duo Jay Rodriguez and Dejan Lovren, Sevilla’s Alberto Moreno, and Swansea City pair Ben Davies and Michel Vorm. The Mirror believe that their virtually completed move for Benfica winger Lazar Markovic will take their total spending spree to £135m.

Rodgers has already been given the green light to bring Rickie Lambert, Adam Lallana and Emre Can to Anfield and he is confident that the club’s American ­owners will ­bankroll another splash.