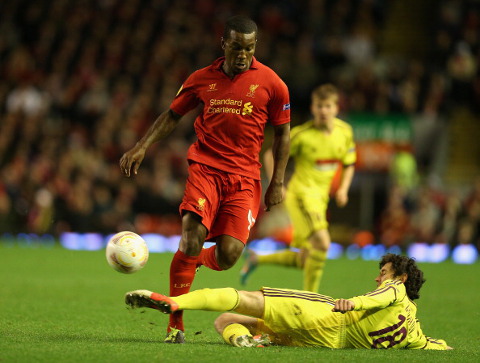 West Bromwich Albion will sign Liverpool’s 21-year-old full-back Andre Wisdom on a season-long loan, according to reports in the Daily Mirror.

The Baggies have won the race to sign the England under-21 international, who spent last season with Championship playoff finalists Derby County.

Derby boss Steve McClaren was keen on bringing Wisdom back to the club for a second season at Pride Park, but it appears that the player will choose a move to the Hawthorns in order to secure Premier League football.

The club are keen on strengthening their options at full-back, and have also signed Belgian left-back Sebastien Pocognoli from Hannover 96 on a three-year deal for an undisclosed fee.

Derby have already accepted that they have missed out on Wisdom, and have moved on to other targets, completing a deal for Coventry City’s Cyrus Christie.

Wisdom looked a bright prospect when he burst onto the scene at Anfield in 2012, making 19 appearances for the club during the 2012-13 season, and scored his first goal for the club’s first-team during their Europa League campaign. He made two Premier League appearances last season before being loaned out to Derby, where he played 38 times.

Liverpool already have plenty of options at right-back with Glen Johnson, Jon Flanagan and Martin Kelly in their first-team squad. Flanagan spent much of last season as an emergency left-back, but with Jose Enrique now returning to fitness and another player likely to join the club, the Reds have decided that Wisdom would benefit from more game time elsewhere.