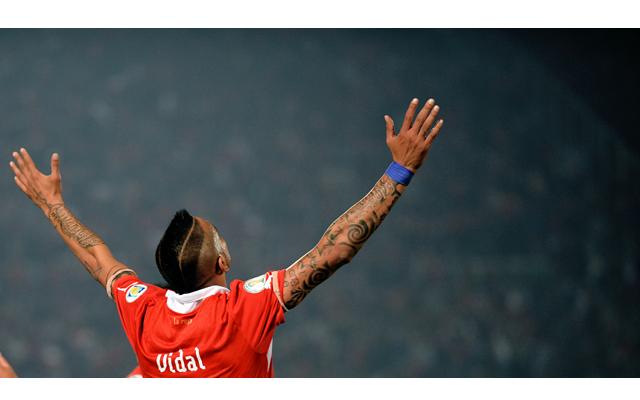 Manchester United’s cross-town rivals could be about to try and beat them to the signing of Juventus start Arturo Vidal.

There could be a dramatic twist in Manchester United’s hunt for the signing of Chile midfielder Arturo Vidal, with Italian newspaper Tuttosport reporting that their bitter rivals Manchester City are ready to make a late bid to lure the player to the other side of town.

Vidal enjoyed a stunning 2013/14 season with Juventus, ending the season as one of Serie A’s stand-out performers and one of the continent’s leading goalscorers from midfield.

It is unsurprising, then, that the Chilean has emerged as one of the most widely coveted players in Europe, following his appearances for Chile at the 2014 FIFA World Cup, with United emerging as the clear favourites for his signature.

United had been believed to be set to tie up a £32 million deal, including Patrice Evra, for the former Bayer Leverkusen man, but it now looks as though there may be a late sting in this transfer’s tail.

Manchester City may be on the lookout for a new big-name midfielder, despite securing the signing of Fernando from FC Porto, due to the fact that star man Yaya Toure’s future at the City of Manchester Stadium looks less than certain.

The Ivorian international is reportedly unsettled at the club due to a smorgasbord of issues, including the club’s apparent failure to celebrate Toure’s birthday to the player’s exacting standards.