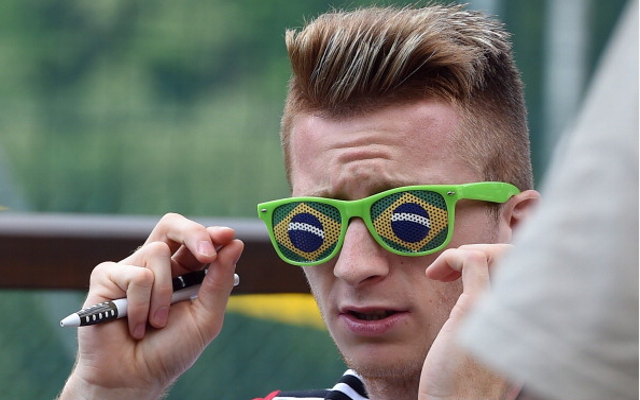 Liverpool are reportedly targeting Borussia Dortmund forward Marco Reus in an audacious £45m raid according to reports in the Guardian.

Anfield boss Brendan Rodgers has bagged a reported £75m from the sale of Luis Suarez to Barcelona and has already started to invest well in the summer transfer market having brought in Southampton pair Rickie Lambert and Adam Lallana as well as German midfielder Emre Can, but it seems the Northern Irishman has further targets in mind.

Reus is said to be upset that his planned move to Barcelona was shelved due to the Nou Camp side opting instead to bring in disgraced Uruguayan Suarez, and this could leave the impressive attacker’s future at the Westfalenstadion hanging in the balance.

The former Borussia Monchengladbach man moved to Dortmund in July 2012 with Jurgen Klopp’s side at that time the reigning Bundesliga title holders, however the club’s fortunes have faded a great deal since then.

Bayern Munich has marched to back to back domestic titles, opening massive gaps between themselves and their rivals, and to top it all off the Allianz Arena side first snapped up Mario Gotze from Borussia Dortmund and then this summer welcomed in Klopp’s top-scorer Robert Lewandowski on a free transfer.

Reus may feel the time is right for a new challenge and having sworn to never sign for Bayern Munich which could narrow down his potential options.

A move to a resurgent Liverpool could interest Reus and the Merseyside outfit are ready to offer a club record £45m to see the deal done.

Reus can operate in a wide attacking role or in a supporting striker role, and perhaps working well with Daniel Sturridge, and has netted an impressive 42 goals in 90 appearances for Borussia Dortmund.

The cultured forward was named in Joachim Low’s 2014 World Cup squad but suffered an ankle injury in a warm-up friendly just ahead of the tournament that ruled him out of contention.