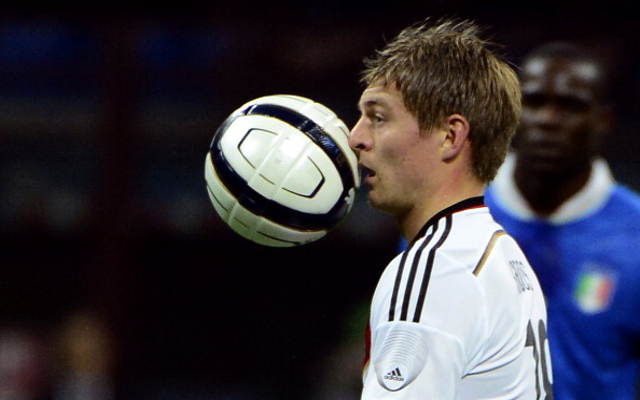 Toni Kroos have been linked with several clubs this summer, but looks set for a move to Madrid…

Toni Kroos will complete his €25million move from Bayern Munich to Real Madrid before the end of the week, after the player confirmed the transfer in an official statement.

The Daily Mirror have reported Kroos’ comments in the sports daily AS, with the World Cup winning midfielder stating simply: “I’ll be going to Madrid either tomorrow or the day after.”

Kroos, 24, who has also won the Champions League and two Bundesliga titles during his time with Munich, played in all seven games of Germany’s successful World Cup campaign – scoring twice in the 7-1 semi-final thrashing of hosts Brazil – and making four tournament assists.

The player came out of Bayern’s youth academy in 2007 and, following a season long loan spell with Bayer Leverkusen in 2009-10, took up a crucial role in the club’s midfield, alongside the likes of international teammate Bastian Schweinsteiger. He has gone on to make 176 appearances for the club, as well as gaining 51 international caps.

However, the player has seemingly set his heart on a new challenge this summer, and has been linked with a variety of European giants, including Madrid, Manchester United and Chelsea.

His arrival at Real has fueled speculation that the Champions League winners will be reshuffling their midfield options this summer. Sami Khedira has been linked with a move to both Arsenal and Chelsea, and confirmation of the Kroos deal could allow Khedira to move on.