Zvonimir Boban, the man who once captained Croatia to a surprise third place finish at the World Cup, has launched a scathing attack on two of the biggest disappointments at this summer’s tournament: Cristiano Ronaldo and Italy.

Goal.com has reported the comments of the 45-year-old, who played 51 games for his country and enjoyed a successful club career with Italian giants AC Milan.

Boban first hit out at 29-year-old Ronaldo, who has scored 50 goals in 114 appearances for Portugal, claiming that his tendency to put himself ahead of the team cost them at this summer’s tournament.

The Real Madrid star couldn’t prevent his country crashing out in the group stage, following a 4-0 humiliation against eventual champions Germany and a disappointing draw with the USA, and Boban believes that the presence of the World Player of the Year was actually a drawback for Portugal.

“Ronaldo is an amazing player and he showed that again in Brazil, even if he missed a number of chances,” Boban writes in his column for Sportske Novosti. “But his biggest flaw is the way he looks at himself and the team.

“He scored to make it 4-1 in the 120th minute of the Champions League final and celebrated like he was insane. That was the ultimate proof that he loves himself. The headlines should be about the team, not about Ronaldo.

“The same thing happened with Portugal in Brazil. There was no order or discipline. All the Portugal players were playing their own game and more occupied with their hair and tattoos. It’s Hollywood behaviour.

“It’s almost as if the players wanted to show there’s more to Portugal than Ronaldo. It’s a sad thing that a team loses its identity because of an unbalanced captain, both for Ronaldo and for an entire generation.”

Boban also had strong words for the performance of the Italian national team, who like Portugal exited in the group stage following defeats against Costa Rica and Uruguay, in which they failed to score a single goal.

It is the second tournament in succession that the Italians have exited the World Cup in the group stage. In fact, they have not been beyond the first round since they won the competition in 2006.

“Italy have been on the slide for years. Once, they were the NBA of football, but they’ve become an average football circus,” said Boban.

“Italian clubs sell their stars these days and [Cesare] Prandelli’s side was the reflection of that development. They looked like they didn’t know what to do on the pitch and how to play. Italy used to know how to win games, but they had even forgotten that.

“They ended the way they were destined to end with such a weak defence, a slow midfield and a silly attacker like Mario Balotelli. Italy have lost their identity.” 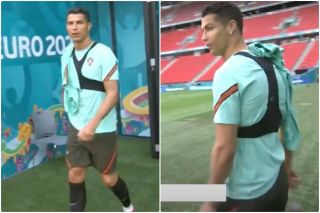