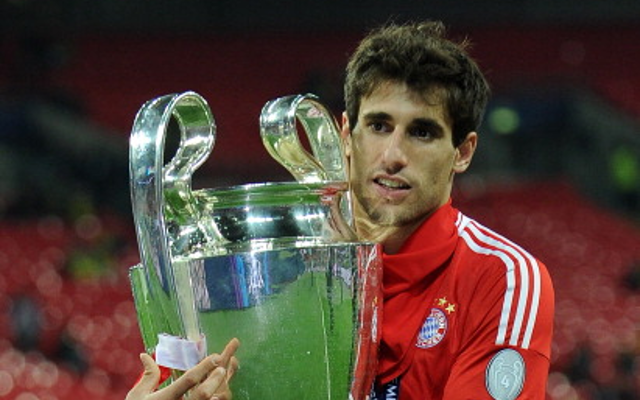 Arsenal could be set to make an approach for Bayern Munich defensive midfielder Javi Martinez as they weigh up alternatives to Real Madrid’s Sami Khedira, CaughtOffside understands.

The Gunners are in the market for a new signing in that position this summer, but look to have been dealt the blow of missing out on Khedira, after being unable to persuade him to join the club due to his excessive wage demands.

The 27-year-old has demanded to be Arsenal’s highest earner with wages of around £150,000 per week, and reports today suggest he may be set for a change of heart as he considers committing his future to the Spanish giants.

Arsenal have already been linked with similar players such as Morgan Schneiderlin of Southampton and Lars Bender of Bayer Leverkusen, though Arsene Wenger may now have made Martinez of Bayern his top target in that area.

The 25-year-old has only been at the Allianz Arena for two seasons, but has been linked with a move away this summer after seeming to fall out of favour with manager Pep Guardiola and finding himself in and out of the starting lineup for much of last season.

The likes of Manchester United and Liverpool have been linked with the Spanish international in the past, but Arsenal’s need for a new midfielder may now see them come in for him as they prepare to rebuild their squad for next season.

Wenger is also on the lookout for a new signing at centre-back as he ponders allowing Thomas Vermaelen to leave the club, and Martinez’s ability to play in defence as well as midfield will no doubt appeal to the French tactician.

Martinez’s arrival would add some much-needed bite and experience to the Arsenal squad, as well as providing depth in a number of positions, and it is thought that he could move for around £25m, a similar fee to that of Khedira.

Bayern are said to be open to letting Martinez leave, but may now be more hesitant after losing another key midfielder in Toni Kroos to Real Madrid, while Bastian Schweinsteiger could also be set for an exit this summer, leaving them somewhat short of depth in an important part of the pitch.

Martinez was part of the Spain squad that crashed out at the group stage of this summer’s World Cup.