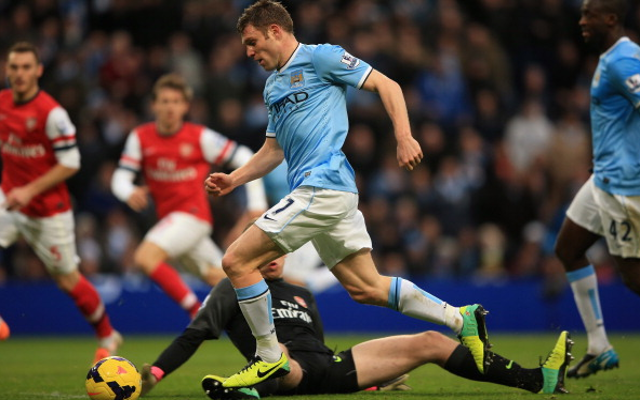 Arsenal are paying close attention to upcoming talks between James Milner and his Man City employers as the England man seeks assurances of his role at the Etihad Stadium ahead of any move to sign a new contract according to the Daily Mirror.

The 28 year old has just a year to run on his current deal and in view of the former Leeds United, Aston Villa and Newcastle United man making just 12 Premier League starts last term it’s perhaps no surprise that Milner wants to know where he stands under Manuel Pellegrini.

Arsene Wenger may well feel that Milner, who can play effectively in a number of roles, could offer him options that would help strengthen his Gunners squad in a cost-effective manner though any move would surely lead to Arsenal having to offer a fairly large wage offer to meet the midfielder’s expectations.

Man City paid £26m for Milner back in 2010 but the experienced performer has seen his first team options limited in recent seasons and will perhaps be tempted by a move to north London.

Milner can be used in a wide role as well as in the centre of the midfield and would cost a fraction of the fee Man City spent on his services though Pellegrini may look to keep hold of the player given his ‘homegrown’ status.