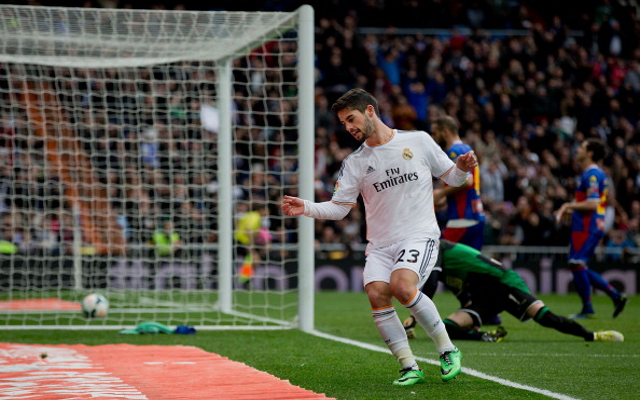 Anfield side could pull off stellar Bernabeu capture.

Liverpool are reportedly leading the chase to sign Real Madrid youngster Isco with Goal.com claiming that the Bernabeu side is looking to sell the Spanish international this summer.

The La Liga side are keen to sell the 22 year old attacking midfielder as they look to generate funds to mount a big bid for AS Monaco’s James Rodriguez.

Real Madrid are apparently close to an agreement with the Ligue 1 side and Isco may well be sold to make way for the Colombian international, who of course greatly impressed at the 2014 World Cup finals, where he finished as the top-scorer.

Isco is likely to leave Real Madrid, not least as Carlo Ancelotti has already welcomed in German midfielder Toni Kroos, and Liverpool are in ‘pole position’ to sign Isco with the former Malaga man perhaps tempted by the chance of becoming the Anfield side’s ‘main man’ following the sale of Luis Suarez to Barcelona.

Real Madrid only signed Isco last June and even though he is contracted to the Spanish capital side until 2018 a deal could be in the offing.

Liverpool have already brought in Adam Lallana, Rickie Lambert, Emra Can and Lazar Markovic with QPR striker Loic Remy also being strongly linked with an imminent move to the Premier League side.

Isco had a solid, if not spectacular, first season at Real Madrid during which he made 53 appearances, of which 18 were from the bench.

The impressive flair player racked up 11 goals and seven assists in 2013/14.