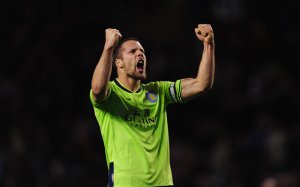 Talk Sport have reported McGrath’s comments, with the former Republic of Ireland international saying: “Man United’s defence is an area which could do with strengthening. They have lost Vidic, Ferdinand and probably Evra.

“With Luke Shaw coming in, it’s going to be a very young and inexperienced defence. I’m hoping he’ll [Louis van Gaal] bring in a good experienced defender. Rob Vlaar would be on that list.”