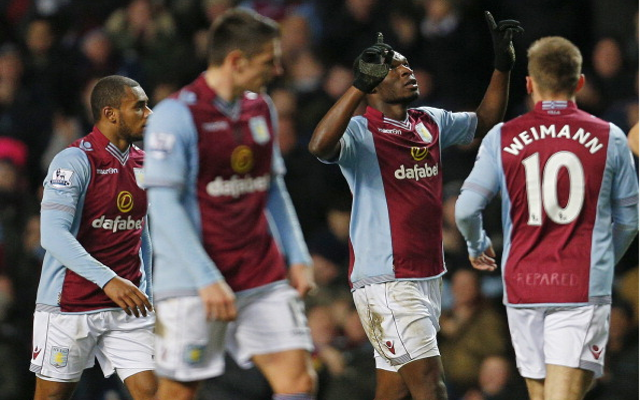 Newcastle United are reportedly interested in signing Aston Villa striker Christian Benteke according to the Chronicle even though Alan Pardew has only just completed the signing of French forward Emmanuel Riviere from AS Monaco.

By all accounts, and perhaps surprisingly, the Villa Park outfit may be open to offers for the big Belgian, who’s second season at the Midlands club proved something of a failure due to average form and fitness issues.

The 23 year old marksman scored 23 goals in his first season at Aston Villa but managed just 11 in last term and an achilles tendon injury ruled Benteke out of Marc Wilmots’ World Cup squad to boot.

Presumably if Paul Lambert was open to selling Benteke he’d presumably demand a big fee for his services and Magpies boss Mike Ashley may not be all that keen on paying up having signed a new of players this summer.

Pardew’s interest in further goal-scoring options is perhaps wise given that Loic Remy will not be available, having returned to QPR following his successful loan spell, and Papiss Cisse continues to struggle for form.

Benteke has scored a total of 34 goals in 67 appearances since his £7m move to the Premier League in August 2012.