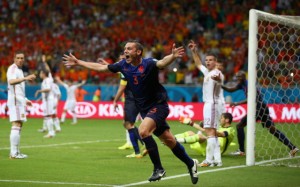 The 22-year-old played in all seven of the Netherlands World Cup games as LVG’s side finished third at the tournament, and scored one of the five goals in the Dutch’s group game thrashing of Spain.

The Feyenoord defender is resisting a move to Lazio and believes he will soon be reunited with his Holland World Cup boss. He is seen as the perfect alternative to United’s No.1 target Mats Hummels, who has no intention of leaving Borussia Dortmund.