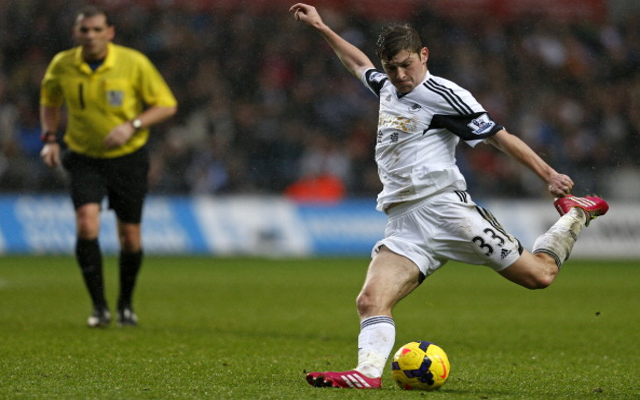 Ben Davies is closing in on a move to Tottenham…

Swansea City left-back Ben Davies, is close to completing his move to Tottenham, with the Daily Telegraph reporting that the young Welsh defender has left the Swans pre-season tour of the US to attend a medical in North London.

The Welsh international, 21, is expected to move to White Hart Lane, while Gylfi Sigurdsson – a former Swans loanee – is likely to go in the opposite direction.

Michel Vorm, another target for Tottenham, who is currently on holiday following his time with the Dutch World Cup team, is also believed to be close to putting pen to paper on a deal with Spurs, where he will play as a back-up to first choice stopper Hugo Lloris.

The two clubs have agreed that Davies and Sigurdsson are both valued at £10m, with the two players swapping clubs in a straight switch, while Vorm will cost Tottenham around £5m.

Sigurdsson – who had looked to be heading for Crystal Palace – will move back to the Liberty Stadium as part of the deal. The Icelander spent the 2011/12 season on loan in south Wales and looks likely to return after being withdrawn from Spurs’ line-up to face Seattle Sounders last night.

Pochettino is yet to make any reinforcements this summer and has admitted he doesn’t expect to spend big like Andre Villas-Boas did a year ago. Memphis Depay has also been linked with a move to White Hart Lane, but funds are likely to be low following the Gareth Bale fueled spree last summer.