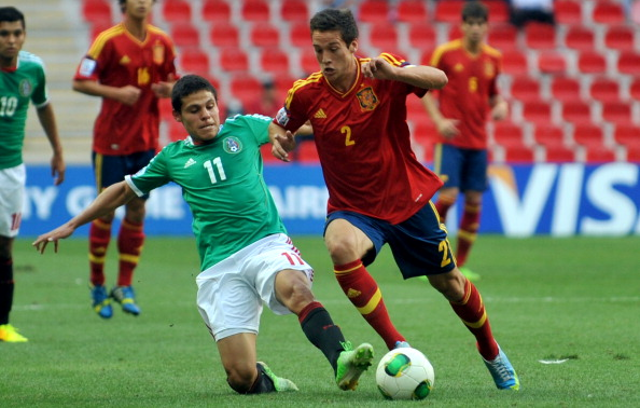 Liverpool are on the verge of finally securing a deal for a new left-back, with Atletico Madrid youngster Javier Manquillo reportedly the subject of a surprise loan move.

According to Sky Sports, the Reds are confident about completing their latest acquisition, who has been the subject of interest from Arsenal over the last two weeks.

Brendan Rodgers is trying to tie up a loan move for the Spain U20 star who is valued around £10m, while he also hopes to complete the transfers of Southampton defender Dejan Lovren, QPR striker Loic Remy and Lille forward Divock Origi by the end of the week.

Sky believe that Remy and Origi are currently undergoing medicals, and will be officially announced as Liverpool players on Thursday.

Arsenal have been in talks for the past fortnight with Manquillo over a similar season-long loan move, with a view to a permanent deal. However, the Reds look favourites to land the 20-year-old, who only featured three times for Atletico last season.

Rodgers has been desperate to add a new left-back this summer, and has twice failed with moves for Sevilla’s Alberto Moreno, while he looks set to miss out to Tottenham in the race for Ben Davies.

John Flanagan spent much of last season at left-back for the Reds, who were disappointed by the lack of success for Aly Cissokho, while Jose Enrique missed virtually the entire campaign through injury.