Liverpool are set to capture Atletico Madrid youngster Javier Manquillo, and their search for a new left-back could be brought to an end as early this week. You can read more about the transfer story here. 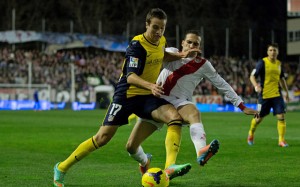 Javier Manquillo Gaitán was born in Madrid on 5th May 1994.

Manquillo began his football career with Real Madrid before moving to city-rivals Atletico in 2007, spending five years as part of the club’s youth academy. He played at Real alongside his twin brother Victor, a forward, but when the club decided to release him, Javier followed suit.

In November 2011 he made his unofficial debut with first team, playing in a friendly game against Zamalek SC, an Egyptian club currently managed by former Spurs striker – Mido.

On 8 December 2011 Manquillo made his official debut for the Colchoneros, starting in a 2-1 away loss against Albacete Balompiéfor in the Copa del Rey (with Madrid eventually going out 3-1 on aggregate). He was subsequently an unused substitute in the matches against Real Sociedad and Malaga, before finishing the campaign in the third division with 13 appearances for the B-side.

On 28 November 2012, again in the domestic cup, Manquillo appeared in his second game with Atlético’s main squad, playing 63 minutes in a 3–0 success at Real Jaén.