Manchester United manager Louis van Gaal is set to launch a £100m summer spending spree after being unimpressed with his team’s narrow 3-2 friendly victory over Roma.

The Sunday Sun has claimed that the new United boss has determined that he needs further additions this summer, following an evaluation of his ‘unbalanced’ squad.

United have already signed Southampton full-back Luke Shaw and Athletic Bilbao midfielder Ander Herrera during this transfer window, for a combined fee of around £58m. 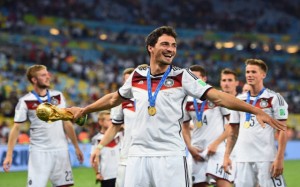 The Borussia Dortmund defender is coming off the back of winning the World Cup with Germany, and is one of the most highly regarded defenders in world football. Dortmund are desperate to hang on to their 25-year-old star, but face an intense battle to do so.