Speculation that club captain Thomas Vermaelen is leaving Arsenal for Manchester United this summer has been given a boost as Calum Chambers wears the Belgian’s squad number.

During the Gunners’ training camp in Austria the new £16m signing from Southampton was spotted donning the No.5 training top, despite all the other players wearing their own designated numbers. 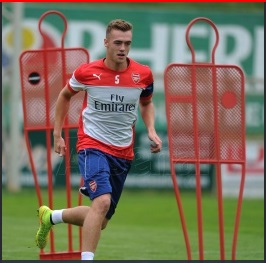