Saturday’s Liverpool transfer gossip: Both Barcelona and Brondby are interested in signing Reds centre-back Daniel Agger, while Brendan Rodgers has suffered a setback in his pursuit of Ezequiel Lavezzi; plus more… 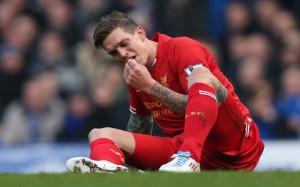 Barcelona and Brondby will battle it out for the right to sign Liverpool defender Daniel Agger, who is resigned to leaving the club this summer following the arrival of Dejan Lovren.

Daily Mail reports suggest that any deal would have to be at the right price in order for Barcelona to proceed, with the Spanish giants having splashed out on French defender Jeremy Mathieu last week. That has opened the door for the Dane’s former club, who are desperate to lure him back to Brondby.

The Mail have also claimed that the future of right-back Glen Johnson remains unclear, with the England international defender yet to be offered a new deal, despite having just one year remaining on his current contract.