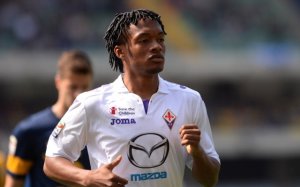 Manchester United look set to miss out on the signing of Colombia and Fiorentina winger Juan Cuadrado, with Spanish giants Barcelona now favourites for the players signature.

According to reports in the Daily Express, Cuadrado has been plagued by transfer speculation since his sharp rise to prominence, the catalyst of which were his stellar performances for World Cup surprise package Colombia.

Domestic side Fiorentina reacted immediately to enquiries by slapping an inflated £30m price-tag on their coveted star. But after months of confusion, doubts and failed negotiations – Barcelona are finally close to capturing their man.