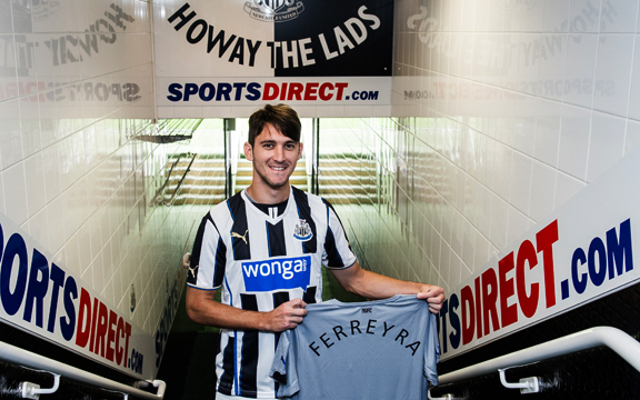 Newcastle United have completed the signing of Shakhtar Donetsk striker Facundo Ferreyra on a season-long loan.

The 23-year-old has joined up with the Magpies squad in Germany, where they are currently based for the Schalke 04 Cup.

Ferreyra could sign for Newcastle on a permanent basis at the end of the current campaign.

He has represented Argentina at Under-20 level and he says that fellow Argentine Fabricio Coloccini convinced him to move to St James’ Park.

“I like the Premier League and when I knew that Newcastle were interested in me, it was a very easy decision to make.

“I spoke to my friend Fabricio Coloccini, and when he told me about the Club, I didn’t need to think twice.”

Newcastle manager Alan Pardew added: “Facundo is someone we know on a number of levels, including his friendship with Fabricio, and we think he could be a big success here at Newcastle.

“This is a player who has played at the top level and is highly-regarded in Argentina.

“He has tremendous potential and hopefully he can realise that here at Newcastle United.”

Ferreyra came through the ranks at Banfield in Argentina, spending four seasons in the first team before moving to Velez Sarsfield in 2012.

He spent just one season at Velez, but he was a big success, scoring 17 goals in 24 games.

His fine form attracted the attention of Shakhtar, who snapped him up in July 2013.

Newcastle lost 3-1 to Malaga on Saturday. They play tournament hosts Schalke this evening.