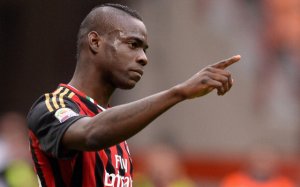 The Sunday Express are unsurprisingly linking Liverpool with a £14m move for AC Milan striker Mario Balotelli, following comments from Reds manager Brendan Rodgers, where he claimed that the forward was a “big talent”.

Milan are thought to be open to selling the Italian, who was heavily linked with a move to Arsenal earlier this summer.

Liverpool are widely regarded to be in the market for another striker, and they could take their chances over the bad-boy marksman.