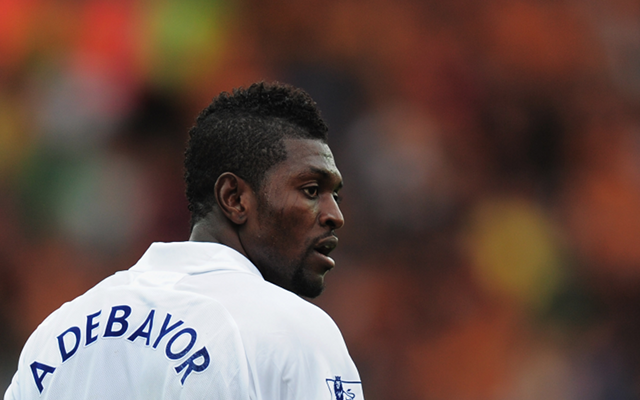 Emmanuel Adebayor has revealed how draining malaria was on him…

Emmanuel Adebayor has revealed how the effects of malaria left him too weak to walk this summer, and admits that he has only recently been able to step up his recovery process.

The Tottenham striker – who is quoted by the Daily Mail – is in a race against time to be fully-fit for the start of the new Premier League season, and could yet leave new manager Mauricio Pochettino disappointed.

Adebayor scored on his return to the Spurs setup yesterday, when the North London side beat an under-strength Celtic 6-1 in Helsinki.

A key player under sacked Tim Sherwood the Togo international made his bow under his new boss after flying home to London from an Africa trip to discover he had the potentially fatal disease.

He revealed how the draining effects of malaria left him unable to walk for a week: “I went back to Togo during the holiday to spend some time with my family,” he said.”I came home to London two weeks ago and then found out I had malaria. I was ill for a week or so, but now I am back training and feeling good now.

“For a week I couldn’t do anything. I lost a kilo which isn’t a lot, but I was very weak for one week. I couldn’t move, I couldn’t walk. It’s a common disease in Africa. When I go back it feels like I have a headache and because you are already in the country where it is common you know what medicine to take to make it go away quickly.

“But in London it’s not the same because it’s not a common disease. I wasn’t too worried because I have seen lots of people with malaria because I grew up there. I knew it would take a few days and knock me down and take everything out of me. I also knew I would have to work hard to get my body back again.