Fortunately, the Welshman appeared to see the funny side as he noticed what his boss had done. 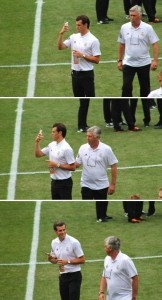