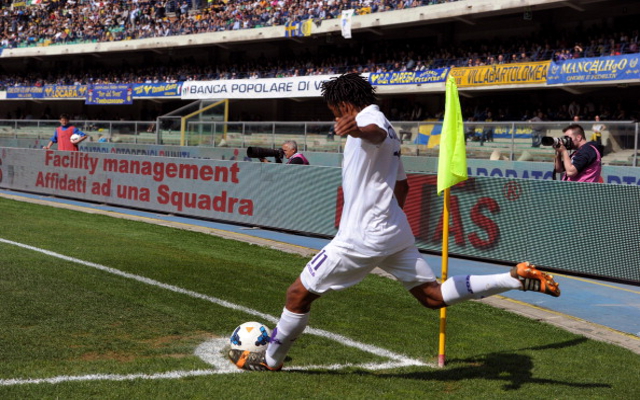 Serie A side set asking price for Colombian international.

Fiorentina will reportedly be ready to accept offers of at least £27m for in-demand Colombian winger Juan Cuadrado this summer, with Manchester United and Barcelona chasing his signature.

According to a tweet from the official account of Catalan newspaper Sport, La Viola are ready to sell their prized asset, after his superb form in Serie A last season and at the World Cup with Colombia this summer, has made him one of the most sought after players in this transfer window.

The likes of Arsenal and Juventus have also been linked with Cuadrado at points this summer, but it currently looks as though it will be a two-way battle between United and Barca to sign him ahead of the new season.

It has previously been claimed that new Barcelona manager Luis Enrique is particularly keen to sign the versatile 26-year-old, as he may be the ideal player to come in and play as a wing-back in a 3-5-2 formation.

New United boss Louis van Gaal may also be about to adopt a similar approach for the season ahead, and Cuadrado has shone as both an attacking midfielder and a full-back in his career so far, showing great ability at both ends of the pitch and on either flank.