Anfield side could be back in for Liberty Stadium ace.

Liverpool could be set to re-ignite their interest in forward Wilfried Bony with Swansea City having reduced their asking price for the Ivory Coast international according to the Daily Mirror.

The Liberty Stadium side had been demanding £19m for the 25 year old but will now look to demand less as they prepare to sell the unsettled striker.

Boss Garry Monk had been keen to keep hold of the former Vitesse Arnhem man, who netted 25 goal in all competitions in his debut season at Swansea City, but Bony has now made it clear he wishes to leave and this has led to a reduction in his asking price.

Liverpool had hoped to bring in QPR’s Loic Remy but a move for the Frenchman was scuppered by a failed medial and as such the timing may be ideal for Brendan Rodgers to make a concrete move for the powerful marksman. 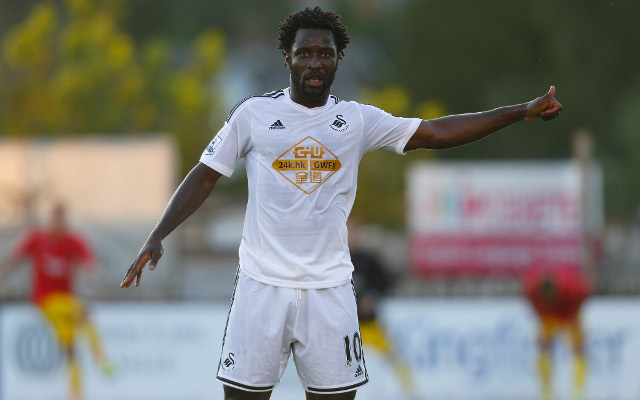 Swansea City paid a club record £12m for Bony and whilst they may not be after £19m for their top-scorer one imagines they will at the very least demand a fee in excess of that which they paid a year ago.

Liverpool sold Luis Suarez to Barcelona in a £75m deal and as such Rodgers will be looking to fill the void left by the Uruguayan and has brought in Rickie Lambert from Southampton to this end but certainly appears keen to further add to his attack.

Belgian Divock Origi has also been brought in but was immediately loaned back to Lille whilst fellow summer signing Lazar Markovic, who works best in a wide attacking role, may well be some way short of a regular spot in the Liverpool first team set-up.