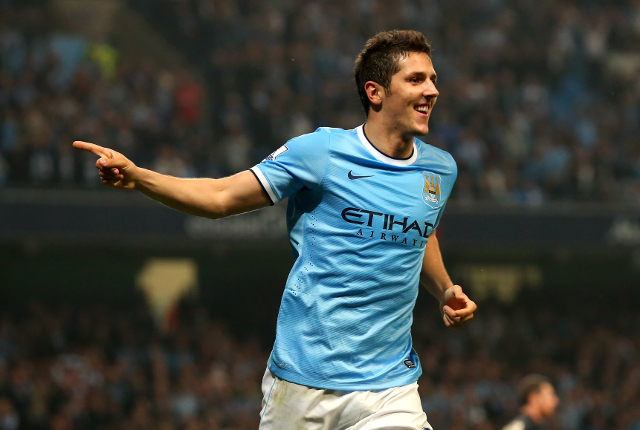 Gunners ask about availability of striker and defender.

Arsenal are weighing up a possible double raid on their rivals Manchester City this summer as they make a formal approach to the Premier League champions over two of their key players.

The Gunners have been linked several times recently with a bid for young centre-back Matija Nastasic, who could be brought in as a replacement for Thomas Vermaelen if he joins Manchester United or Barcelona.

It is thought that City are ready to sell the 21-year-old for the right price, with the club spending big on the imminent signing of Porto star Eliaquim Mangala to become first choice alongside Vincent Kompany in defence, while veteran Argentine Martin Demichelis is the preferred option for manager Manuel Pellegrini as a backup in that role.

Meanwhile, Arsenal could also be in with a chance of sealing a surprise loan move for City forward Stevan Jovetic as they look to strengthen upfront on the cheap, with some suggestion that City may also be willing to let the player leave for a year.

The Montenegro international has been strongly linked with Arsenal in the past, becoming one of their main transfer targets last summer alongside the likes of Gonzalo Higuain and Luis Suarez, though he eventually opted for a move to the Etihad Stadium.

However, after a few problems with injuries, Jovetic found regular first-team football hard to come by as he fell behind big names such as Sergio Aguero, Edin Dzeko and Alvaro Negredo in the pecking order at the club, and a temporary move away now could suit both parties perfectly.

Although City will no doubt be reluctant to see two of their players join a rival, they may be ready to let one of them go at least, with talks set to resume this weekend after initial enquiries were made by the Gunners earlier this week.

Jovetic would no doubt be a useful addition upfront and provide a good alternative to Olivier Giroud in attack, with Arsenal failing to bring in some of their other targets in that position, such as Mario Balotelli, Loic Remy or Jackson Martinez.

These two clubs have done plenty of business in recent times, with City snapping up big names such as Emmanuel Adebayor, Samir Nasri, and, more recently, Bacary Sagna from the north London club.