Which players would help re-establish Manchester United as title contenders…

We reported earlier this week, that Manchester United’s new manager Louis van Gaal looks set to axe as many as five key first-team players from his squad, after allowing them all a run in the team during their pre-season tour of the US.

CaughtOffside next takes a look at the five players that United could use to replace those exiled – signings that would in turn help lead the club back to Champions League football, after last season’s disappointing performance under the stewardship of David Moyes. 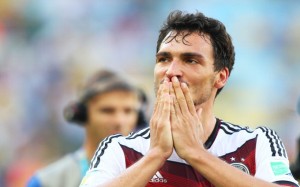 It goes without saying that Hummels is by no means a direct replacement for Anderson, the two are clearly completely different players. However, United are desperate for defensive reinforcements this summer – and Hummels is the dream candidate to take a vacant spot in Louis van Gaal’s squad. With Rio Ferdinand having joined QPR, and with Nemanja Vidic moving to Inter Milan, United have lost two world class centre backs, and would love to convince Borussia Dortmund’s World Cup winning defender to join their ranks. Dortmund are desperate to hold on to one of their prize assets, however he could be available at the right price.