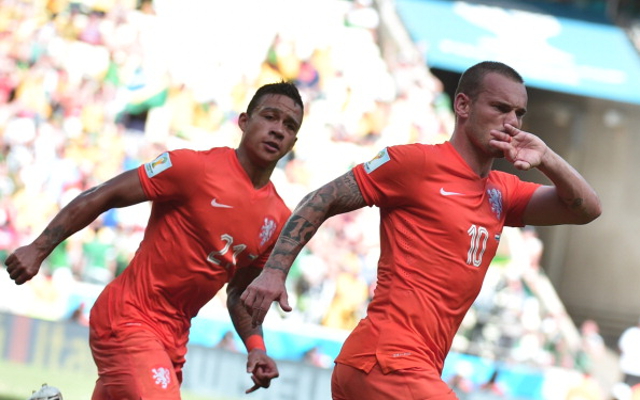 United and Liverpool targets on Monaco agenda.AS Monaco are being linked with moves for two big names in Wesley Sneijder and Xherdan Shaqiri as they attempt to rebuild after selling James Rodriguez to Real Madrid, according to Fichajes.net.

The Ligue 1 giants brought in £63m from the sale of Rodriguez to Madrid earlier this summer, with the club unable to keep the talented Colombian youngster after his superb displays for his national side at this summer’s World Cup.

Radamel Falcao could be set to follow Rodriguez out of the exit door after also being linked with the Spanish giants, as well as with Premier League giants Liverpool, but Monaco have some exciting deals of their own in the pipeline.

The French outfit could be keen on signing both Sneijder and Shaqiri to enhance their attacking midfield options, with both players able to operate in a number of advanced roles in the middle of the park.

Sneijder, currently of Galatasaray, has been linked with Manchester United several times in the past but may now be available as their interest has cooled, while Shaqiri is being tipped to leave Bayern Munich after failing to hold down a regular place, having previously been linked with Liverpool.