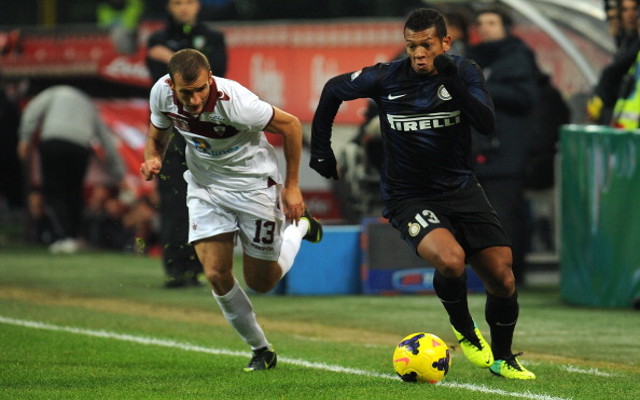 Manchester United could be boosted in their pursuit of Inter Milan midfielder Fredy Guarin, with the Italian giants ready to sell the Colombian international after signing Gary Medel from Cardiff City.

The Serie A side confirmed Medel’s arrival at the San Siro in a £10m deal from the Welsh side, with the Chilean impressing for his national side at this summer’s World Cup and showing himself to be a highly capable player in both defence and midfield.

With the 27-year-old providing Inter with extra depth in the midfield department, it now looks as though the club will be more willing to allow Guarin to leave, with the former Porto star keen on a move to Old Trafford before the start of the new season. United, however, remain keen on tying up a deal for Juventus star Arturo Vidal, with Guarin occasionally linked as a target for Louis van Gaal as a backup option to the in-demand Chilean, who has also been linked with Arsenal and Liverpool this summer.

Still, Guarin has been another top performer in Serie A, earning a reputation for his great work rate and all-round ability on the ball, playing in a similarly energetic box-to-box style to that of Vidal. Inter’s signing of Medel may be in preparation of Guarin’s departure, with the club seemingly giving up much hope of keeping the player after he has had his head turned by interest from United, as well as from Juventus back in the January transfer window.

The Red Devils have been linked with some exciting big-name targets in recent times, with Vidal and Guarin emerging as priorities in midfield after they missed out to Real Madrid for the signing of Toni Kroos, while the likes of Angel Di Maria, Juan Cuadrado and Mats Hummels also remain in van Gaal’s sights as the new season approaches.