Manchester United have been mocked by giant billboards in the past…

A Manchester football club has once again embarked on a giant advertising campaign – with this billboard declaring: “Welcome to Vanchester”.

The campaign is attempting to promote new Manchester United manager Louis van Gaal, but has been widely criticised on social media website Twitter.

References have been made to the fact that the Dutchman is still yet to prove himself at Premier League level, as well as the mockery Everton recently received for a similar poster displaying manager Roberto Martinez at Goodison Park.

QUALITY: A ‘Welcome To Vanchester’ billboard goes up in Manchester. pic.twitter.com/g2HPcg4uWr

Several years ago, Manchester City were responsible for this iconic image of Carlos Tevez, who had recently chosen to sign for City, rather than United. 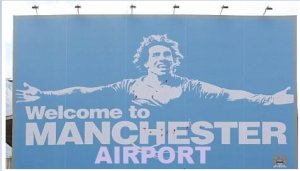