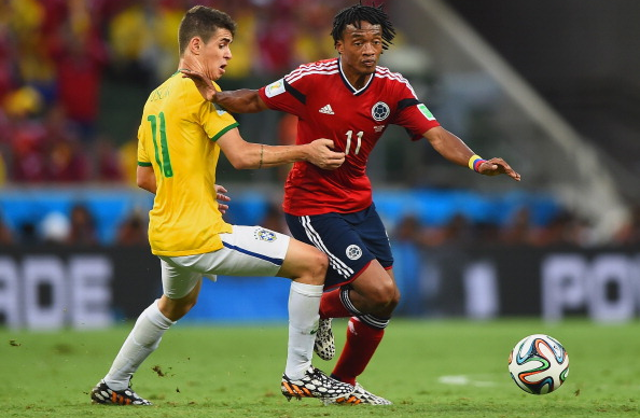 Premier League sides receive boost in chase for £32m wide-man.Manchester United and Chelsea have been given a clear path to battle it out for the signing of Fiorentina winger Juan Cuadrado after Barcelona dropped out of the running, according to the Metro.

The Red Devils have been linked with the in-form Colombian attacker for much of the summer as Louis van Gaal sees him as the ideal player to fill the wing-back role in a 3-5-2 formation, though Barcelona have looked like being their main competitors for his signature.

However, the Catalan giants have seemingly cooled their interest in the 26-year-old, who shone at this summer’s World Cup after also impressing in Serie A last season, leaving United in a good position to snap him up.

Still, Barca dropping their interest has led to Chelsea joining the chase to sign him ahead of United this summer, and Jose Mourinho’s side may yet deal this transfer blow to their rivals ahead of the new Premier League season.

The Blues are not in great need of attacking midfield players, but may be set to make some changes in that area as German wide-man Andre Schurrle is linked with a move to Atletico Madrid.

According to recent reports, Cuadrado would command a fee of around £32m.

Read more Manchester United FC news.
Find out who are the richest footballers in the Premier League here.
Cuadrado to Man Utd.