Man United boss Louis van Gaal has instructed chief executive to secure the servies of a trio of top talents by Monday morning as he looks to improve his Old Trafford squad.

The Dutchman watched on as his depleted side fell to a surprise home defeat to Swansea City in his first Premier League game in charge and will now look to Woodward to complete long running deals within the next 48 hours.

Chief among his targets is Juventus playmaker Arturo Vidal with Man United ready to stump up a club record £44m bid for the 27 year old, an offer they are confident will land the Chilean.

Man United have reportedly already agreed personal terms with the attacking midfielder with a £182k a week deal on the table for the Serie A star and van Gaal will look to the former Bayer Leverkusen man to offer some guile and attacking intent and is looking to make room in his midfield for his arrival.

Van Gaal is looking to offload Marouane Fellaini, Nani and could listen to offers for Shinji Kagawa, three players who have flattered to deceive over the past year, though Man United will have to accept the prospect of garnering fees below those paid for the trio.

Vidal has played a pivotal role in three successive Serie A title triumphs, netting 28 goals in 95 appearances, and is known to be a player Louis van Gaal has been tracking for some time.

The former Dutch national team coach will also hope to have Ajax utility man Daley Blind on board in the coming days with Man United have agreed to pay the £17m asking price placed on the 24 year old.

Blind can effectively fill a number of roles, most commonly used either at left-back or in a defensive midfield role, and will offer Louis van Gaal genuine strength in depth and is clearly a player he knows well.

Van Gaal wants to bring in the adaptable Sporting Lisbon star and the club’s offer is one that the player’s ‘part-owners’ want to see accepted by the Primeira Liga side are not happy with the bid and want to secure a bigger fee.

Doyen Sports, who own 75% of the player’s rights, insist that Sporting Lisbon accept the offer on the table and if they do not then they will look to fine the club a significant amount as per their contractual arrangement they have. 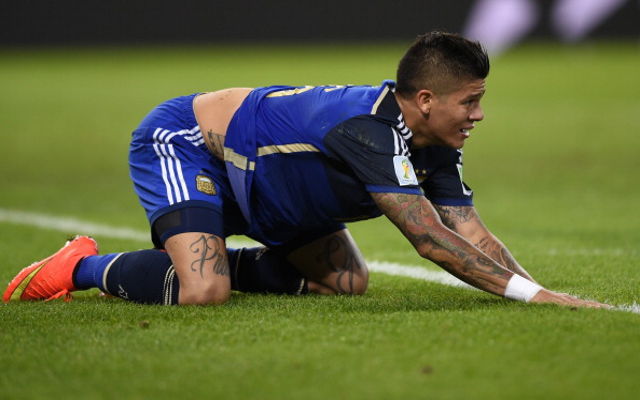 Rojo has allegedly refused to train with the club and as such may force Sporting Lisbon to accept defeat to avoid the prospect of being left with an unhappy player at the end of the transfer window.

The World Cup star can be used at centre-back, as well at left-back, and would offer a quality addition to help offset the summer departures of Rio Ferdinand, Nemanja Vidic and Patrice Evra.