Manchester United are refusing to allow rivals Liverpool to forget last season’s near miss on the Premier League title, with these t-shirts on sale at Old Trafford today.

United, who are entertaining Swansea City in their opening match of their new campaign, had one supporter selling this top with the message: “ever slipped or fallen at work?” – referencing Steven Gerrard’s decisive slip which allowed Demba Ba to score in the Red’s 2-0 defeat to Chelsea last season. 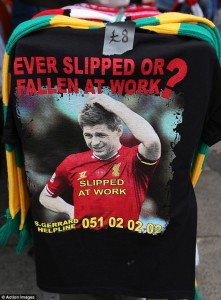