A look at the best young team in the Premier League…

Manchester United raised more than a few eyebrows when manager Louis van Gaal included youngsters Tyler Blackett and Jesse Lingard in their team to face Swansea City on the opening day of the Premier League season.

Flick through the pages below and find out how the duo would fit into a Premier League U21 XI: 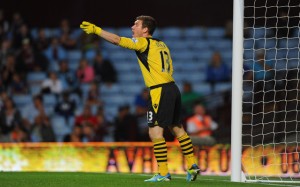 Goalkeeper’s have something of a reputation for developing later on in their career, and with that in mind it comes as little surprise that there is a lack of Premier League quality goalkeeper who are 21 or younger (Thibaut Courtois is 22). However, Aston Villa’s Jed Steer (21) – an England youth international currently on loan with Doncaster Rovers – has a bright future.